A mission to Antarctic research stations is a timely reminder of the importance of international cooperation for science and the climate, Ambassador Florence Jeanblanc-Risler says. 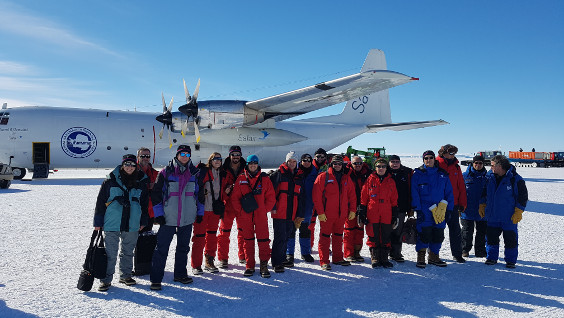 The Ambassador returned on Wednesday November 1 from a five-day visit with her Italian colleague on earth’s southernmost continent.

The visit included include Italy’s coastal summer station Mario Zucchelli, the German station Gondwana and the new Korean all year around Jang Bogo station, all of them around Terra Nova Bay.

The two ambassadors had also an opportunity to talk by Skype to the French-Italian team wintering in Concordia station at Dome C, a cooperation between France’s Institut polaire français Paul-Emile Victor (IPEV) and Italy’s National Agency for New Technologies, Energies and Sustainable Economic Development (ENEA) and Programma Nazionale di Ricerche in Antartide (PNRA). “Antarctica has an impressive history of international cooperation in the interest of science and our shared environment, and also because in a harsh environment logistical cooperation and partnership are crucial for the success of our countries’ Antarctic missions” the Ambassador said.

“Antarctica is one of our greatest laboratories for understanding the history of our planet”.

“The ice of Antarctica encapsulates the water precipitations over the last hundreds of thousands of years. It provides therefore a precious benchmark and insight for past climate and better understanding today’s climate.”

The French scientist Claude Lorius, depicted in French director Luc Jacquet’s 2015 documentary Ice and the Sky (La Glace et le ciel), began studying Antarctic ice in 1957. In 1965, he was the first scientist to be concerned about global warming and climate change by studying the ice air bubbles.

Now, French and Italian Scientists at the Concordia base are seeking a 1.5 million-year-old ice sample to provide further information about the historical composition of Earth’s atmosphere as part of the European Project for Ice Coring in Antarctica (EPICA) project.

EPICA involves cooperation between 10 countries and has so far reconstructed a climate history going back 800,000 years.

While in Antarctica, the Ambassador met the French researchers and support personnel on their way to France’s Dumont d’Urville station.

The Ambassador would like to thank His Excellency Fabrizio Marcelli and the PNRA 33rd expedition leader Alberto Della Rovere and his team for their hospitality at Mario Zuchelli.