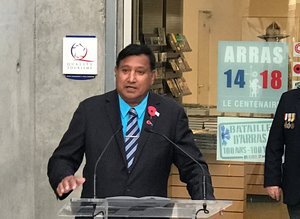 Queen’s Representative to the Cook Islands Tom Marsters speaks at centenary commemorations of the Battle of Arras.

Geography The archipelago of the Cook Islands has 15 islands. These have various landscapes: mountains, atolls and high atolls. The total land area of the country is about 240 km². Population In the Cook Islands, a census takes place every five years. The 2011 census counted a total of 17,794 inhabitants. 75% of the population is urban. Currency New Zealand dollar (NZD). The Cook Islands Dollar is also used. Economy Like other South Pacific nations, the Cook Islands’ economy suffers due to the country’s isolation, a lack of natural resources, deficient infrastructures and natural disasters that regularly affect the region. However, the Cook Islands maintain a close economic and political relationship with New Zealand. Their status of free association with New Zealand grants them annual financial assistance that varies between 7 and 10 million New Zealand dollars (between 4 and 6 million euros) every year. Politics The Cook Islands have benefited from the status of free association with New Zealand since 1965. However, they have retained complete responsibility of their domestic affairs. The two parties represented in parliament are the Cook Islands Party (CIP), currently in power, and the Democratic Party (DP) whose leader is Mr Wilkie Rasmussen. Foreign affairs Since 2001, the Cook Islands have complete sovereignty in managing their Foreign affairs according to the common declaration of 6 April 2001. The country is not a member of the General Assembly of the United Nations.