On an official visit to Samoa from the 18th to the 21st of May, the Ambassador of France H.E. Mrs Florence Jeanblanc-Risler will present her credentials on Tuesday the 19th of May to H.E. Mr Tuimalealiifano Va’aletoa Sualauvi II, representative of H.E. Mr Tui Atua Tupua Tamasee Efi, Samoa’s Head of State. 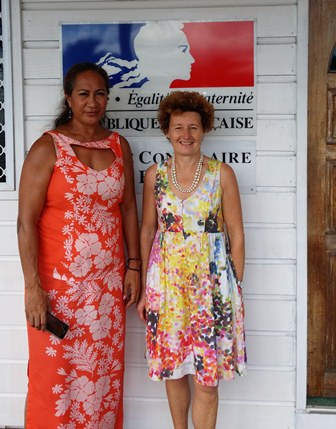 Ambassador of France in New Zealand, Mrs Jeanblanc-Risler is also accredited to Cook Islands, Niue and Samoa. On her first trip to Samoa, H.E. Mrs Jeanblanc-Risler met with the Deputy Prime Minister Hon. Fonotoe Nuafesili Pierre Lauofo and the Minister for Agriculture and Fisheries, Hon. Le Mamea Ropati. During her visit, the Ambassador also discussed the question of climate change and the challenges that it represents for the islands of the Pacific with SPREP Deputy Director-General Mr Kosi Latu.

Furthermore, she met with a representative of the World Bank in Apia to discuss the challenges of development and financing. The Ambassador had meetings with the Vice Chancellor of the University of Samoa, and Australian and New Zealand representatives, including H.E. Mrs Sue Langford, High Commissioner of Australia in Samoa and Mrs Jackie Frizelle, High Commissioner of New Zealand in Samoa. Her Excellency also had the opportunity to meet the French community during a reception which she hosted.

Boasting more than 20 years of experience within the Ministry of Economy, Finances and Industry, H.E. Mrs Jeanblanc-Risler took up her post as Ambassador of France in New Zealand on the 1st of March 2015. Having graduated from the National School of Administration (ENA) and the School of Political Sciences in Paris, “Sciences Po”, she also holds a Master of Arts in International Relations from the University of Columbia. H.E. Ambassador Jeanblanc-Risler is a Knight of the Legion of Honour, the Order of Merit, and the Order of Art and Culture. This post is Mrs Jeanblanc-Risler’s first post as Ambassador of France.