A few days before the Armistice, on 4 November 1918, a small town in the north of France, Le Quesnoy, was liberated from four years of German occupation by New Zealand forces. The town was occupied by 1,500 Germans who refused to give themselves up. 400 soldiers from the New Zealand division were wounded, 93 of these soldiers died and were buried in Le Quesnoy’s local cemetery.

This liberation remains permanently etched in the memory of Le Quesnoy’s inhabitants.

The following is an account of the battle as told by Lieutenant Harry Selwyn Henrick, of the New Zealand Rifle Brigade.

“The town was completely encircled by a huge brick wall, 12-15 metres high, with a 200 metre-wide ditch around the outside, inside of which had been built, at regular intervals, a dozen metre-high brick bastions covered with trees and scrub.

“These bastions, despite their construction well before modern weaponry, gave the Germans, who were equipped with machine guns, a strategic view point and cover. Most of the town’s inhabitants decided to stay at home, in their houses or their cellars, continuing towards the final battle. 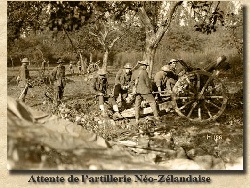 The New Zealand division’s general campaign strategy was to encircle the town and to advance to about eight kilometres. The New Zealand Army Brigade were to take the town while the New Zealand First Infantry Brigade, moved around the town, followed by an advance up to the front line.

"Our first objective consisted of following a railway line, parallel to the front, quite close to the town and strongly held by the enemy. Our advance was covered by a mobile artillery barrage, which was halted by the wall and also by the fact that there were civilians in the town. Nevertheless, at around 5.30am our artillery bombarded the walls and the external defences of the town, by using flaming petrol bombs launched with special guns, driven into the ground. The charge, electrically triggered, exploded in a ball of fire at the moment of impact, causing great terror in the defenders’ ranks.

"It was impossible know if this flaming petrol bombardment caused serious losses to the enemy, but it certainly affected their morale. It was a Dantesque spectacle to see the German machine-gunners leaping about frenetically above the wall, their silhouettes standing out perfectly against a wall of flames. And since then, I have never heard of such a beautiful bombardment method. Neither have I heard of this kind of bombardment being used since or anywhere else. 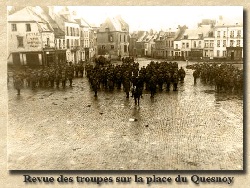 “After capturing this section of the front line, our company held fire momentarily in order to help the victims and to transfer the prisoners. After having registered several losses, the companies at the head of the 4th Battalion arrived at the foot of the wall.

"After much hesitating, we could see that by placing the surviving ladder against a narrow wall that covered the inside ditch in one place, it just managed to reach the height of the main wall. Once it was raised for the first time, the Germans prevented us from using it by throwing many stick-bombs joined together in a bundle.

"During this time, Captain Wapier, an officer from Auckland and a mortar fire specialist, bombed the top of the wall with special mortar whilst the others, infantrymen, maintained fire with "Lewis" rifles and standard rifles. Under the cover of this fire, 2nd Lieutenant Averill, assisted by 2nd Lieutenant Kerr and his section, scaled the ladder, losing no time in reaching the top and even entered the town right under the noses of the dumfounded Germans, surprised by such great speed. The Germans took refuge in burrows that they had dug into the ground, as they knew what was happening (they understood the situation). The rest of our troops, led by the Commanding Officer, scaled the wall as fast as their “Lewis” rifles, ammunition and other effects would allow them.

"Our first concern on entering the town was to encircle and disarm the prisoners, to extinguish the burning homes - in fact the stables were on fire with horses inside - and to clear the mines and traps. One of the Germans proved to be their paymaster...he had on him the equivalent of two weeks’ pay for the entire garrison. At that particular moment, he was as unaware as any of us, that in the space of two short weeks we would be in Germany where we would receive our pay in marks, the bank notes in marks were to become mere souvenirs, some of us even used them to light our pipes.

"The civilians in Le Quesnoy had been under German domination for four years and their joy literally exploded. Their elation at being liberated was wonderful to see. We were covered in mud, exhausted and marked by the ordeals of the battle. But everyone - women, the elderly, children and even the Little Sisters of the Poor - came out of their cellars to come to meet us, laughing and crying, they gave us kisses, flowers and even food.

“It was the 4th Battalion that was the first to arrive in the town... but they were upstaged by the 2nd Battalion who marked their arrival with their very own orchestra. When the French flags appeared and they played the French national anthem in the square, most of the elderly were crying uncontrollably.

“This is how our final battle ended. It received a lot more attention than previous battles because it was unique in many ways: the attack of an old walled city occupied by civilians; flaming petrol bombs; the use of ladders to scale the walls; all of this was an unusual mix: a war both medieval and modern. The result was so much more than satisfactory.

“All of this meant so much more than the conquest in Passchedaele of 600 metres of muddy ground, pitted by shells, especially when you consider the fact that not one civilian life was lost in the entire operation!” 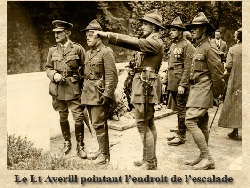 Born in 1897, Lieutenant Averill was honoured for the battle of Bapaume in August 1918, which earned him the Military Cross. But it was the liberation of Le Quesnoy which saw his name go down in history. During this attack he was in fact the first man to scale the town’s wall with the help of a simple ladder. 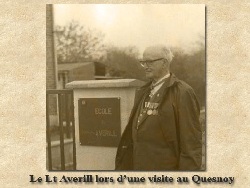 To pay tribute to his exemplary courage, the town named him Citizen of Honour in 1968 and he was awarded the French Legion of Honour in 1973. He died in 1981, in Christchurch.

The double inauguration of the belfry and wall monuments, 14 July 1923

After World War I, two war memorials, a French memorial near the Belfry and a New Zealand memorial within Le Quesnoy’s wall, were inaugurated on the same day, on 14 July 1923. 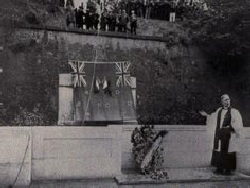 Marshal Joffre arrived in the region in the morning, stopping all along the way to place sprays of flowers beneath the monuments dedicated to the soldiers who had given their lives for their country, before arriving in Le Quesnoy.

The long inauguration ceremony was punctuated by many speeches, French, English and Belgian national anthems, and the bestowing of the Military Cross on the town of Le Quesnoy. 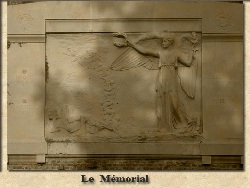 The monument dedicated to the New Zealand soldiers is an embossed design featuring several symbolic elements:

soldiers scaling the wall of the city of oaks with the help of a ladder;

the palm, held out to the soldiers by the winged woman, symbolising victory;

crosses, below and to the left, showing the numerous lives lost on that day;

an epitaph paying homage to the New Zealand soldiers;

ferns, New Zealand’s emblem, were planted at the foot of the memorial;

on both sides of the monument, the emblems of New Zealand and of Le Quesnoy can be distinguished.

Since the victory of 4 November 1918, the passage of these New Zealand soldiers in Le Quesnoy has been marked by numerous physical reminders of the event and of its liberators:

the New Zealand gate of honour;

the Dr Averill Street and Kindergarten;

the twin towns of Le Quesnoy and Cambridge (Waikato).

It is equally important to note that soldiers of the British Empire were not repatriated to their home countries following their deaths overseas. This is why they are buried in Commonwealth cemeteries in Le Quesnoy and its region. Sixty-five soldiers from the New Zealand Division lie buried in Le Quesnoy’s cemetery.

Despite the large physical distance that separate France from New Zealand, ties between the two countries remain very strong. Le Quesnoy regularly hosts New Zealanders who come to visit the memorial and the cemetery.

Lieutenant Averill, who was the first to pass over the town’s wall, visited Le Quesnoy many times and it is now his son, Colin Averill, who attends the ceremonies.

Furthermore, a delegation from the New Zealand Embassy in Paris visits the town on ANZAC Day and on 11 November to attend ceremonies each year, in memory of the soldiers.

All these elements show that the New Zealand soldiers have made their mark in the history of our country forever. To thank them for the incredible military feat that they achieved, the town of Le Quesnoy has offered New Zealanders a part of their wall forever, opposite the memorial. When you visit the memorial, you will find yourself, as it were, in New Zealand.