Randell Cottage, located in Wellington, New Zealand, was established in 2001 as a rotational residency for French and New Zealand writers. 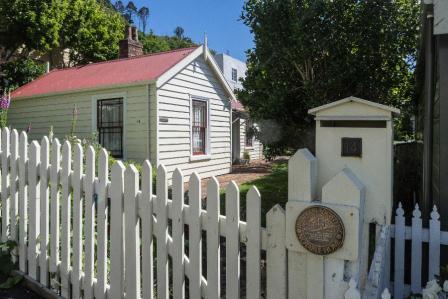 The residency is jointly supported by the French Embassy in New Zealand, the Randell Cottage Writers Trust and the Arts Foundation of New Zealand and is the welcome result of an extensive project to offer a counterpart to the Katherine Mansfield Fellowship in Menton, France, which has enabled many of the great names of New Zealand literature.

Wellington is an ideal location for a writers’ residence with its distinct cultural presence with its diverse range of cultural events and lively café culture. It’s also home to numerous bookshops, public and research libraries and Victoria University of Wellington’s renowned creative writing course. Randell Cottage is a 19th century house in the heart of the colonial district of Thorndon, just a few steps away from the botanic gardens; and despite having undergone repeated renovations, it has retained all of its original charm.

The Residency lasts for a period of up to 5 months, traditionally between January and June, and welcomes applications from authors holding French citizenship, having published at least two books and with a good command of the English language. The French Embassy’s Cultural Services network of contacts and partners is available to the resident during the residency term.

The selection jury is made up of leading figures of the local book industry as well as representatives of the French Embassy in New Zealand.

The 2021 laureate is French writer and editor Caroline Laurent. She is the author of And Suddenly, Freedom (co-written with Evelyne Pisier) and The Shores of Anger.

Caroline Laurent is expected to take up her residency as soon as the circumstances permit (due to border restrictions). If she is unable to travel into New Zealand in 2021, her residency will be rolled into 2022, in which case there will be no call for 2022 applications.

These aren’t being administered by the Embassy of France. For more information, T&C’s and how to apply, please visit: www.randellcottage.co.nz/residency

Please use this contact form to get in touch with the Cooperation Office.