The Embassy of France in New Zealand has helped local publication Cuisine Magazine showcase French and New Zealand wines for their March issue.

Three judges from the monthly magazine brought and reviewed twelve Burgundy and Twelve New Zealand 2013 pinot noirs to the French Residence on December 16.

Ambassador Florence Jeanblanc-Risler said the event was a reminder of "the really amazing flow of exchanges" between the two countries.

An exchange programme which received support from the France-New Zealand Friendship Fund has taken young New Zealanders to Burgundy to learn about winemaking. 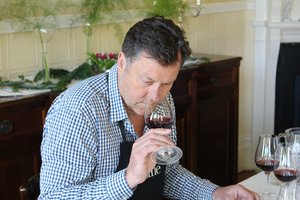 "I think it’s a very nice way to see that two countries can work together and two countries can actually add value to something which is so...embodied...in each country’s culture and history," the Ambassador said.

Figures from industry organisation Le Bureau Interprofessionnel des Vins de Bourgogne indicate 28% of Burgundy’s 1.4 million hectolitre annual production comprises reds and rosés, with roughly half of all the wine produced in the region being exported.

Cuisine wine writer John Saker said the event was about "celebrating the differences between the home of pinot noir and those pinot noirs from New Zealand".