Where is Wallis and Futuna?

Wallis and Futuna are a Polynesian French island territory in the South Pacific located about two-thirds of the way from Hawaii to New Zealand, between Fiji and Samoa. It is made up of three main volcanic tropical islands and a number of little islets. The territory is split into two island groups lying about 260 km apart: Wallis Islands (Uvea Islands) in the north, and Hoorn Islands (Futuna Islands) in the south.

These two forgotten specks that lie in the centre of Polynesia/Melanesia make up one of the world’s least known countries. The inhabitants, who are markedly more reserved than those in most Polynesian isles, are happy to keep it that way. This French territory has managed to keep its culture remarkably intact throughout serious Catholicism and a strong French presence.

Wallis, the most populated island, is fairly flat, with verdant volcanic hillsides rising gently to 145 meters and impressive freshwater crater lakes. The main island of the Wallis group, Uvéa, and 10 other volcanic islands in the eastern half of the lagoon are surrounded by a barrier reef bearing 12 smaller coral islands, many with fine beaches.

Futuna and neighboring Alofi are mountainous, with Mt. Puke on Futuna reaching 524 meters. Though there are many freshwater springs on Futuna, Alofi two km to the southeast is uninhabited due to a lack of water. A reef fringes the sandy north coast of Alofi; the south coast features high cliffs. In adition to those islands, the territory counts some 20 uninhabited tiny islets.

The islands have a hot, rainy season from November to April and a cool, dry season from May to October. The average humidity is 80% and the temperature 26.6 °C (79.9 °F). 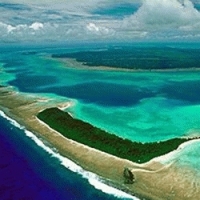