Le Quesnoy and New Zealand - a Wealth of Exchanges

Exchanges between the town of Le Quesnoy and New Zealand continue to multiply from year to year. Not one ANZAC Day commemoration goes by without the presence of New Zealand and French representatives. It is important to remember that Le Quesnoy is one of the two towns in France (the second being Longueval) where ANZAC day is commemorated, to pay tribute to Australian and New Zealand soldiers who died on the battlefields.

Several stained-glass windows in the Saint Andrews of Cambridge church, another such link, are dedicated to the memory of the soldiers who died in the field of honour. The three-part panes that commemorate World War I are of particular interest, especially to Le Quesnoy. In fact the right panel shows soldiers scaling Le Quesnoy’s walls on 4 November 1918, a week before the Armistice.

These stained-glass panes were unveiled in December 1923, the day of the inauguration, in France, of the memorial to the soldiers who lost their lives.

There is an interesting connection between Saint Andrews church and the town of Le Quesnoy. The parish priest at that time, Reverend CE Mortimer-Jones, was working in France as an army chaplain.

Whilst the design of the stained-glass was in the formative stages of linking the events of Gallipoli and Le Quesnoy, the priest’s assistant, Reverend Walter Averill, was in fact sous-Lieutenant Leslie Averill, one of the New Zealand officers who played a primary role in the liberation of Le Quesnoy. Their father, Reverend AW Averill, was Bishop of the dioceses of Auckland and Arch Bishop of New Zealand.

1998: commemorating the 80th anniversary of the liberation, a decisive step towards the twin-towns of Le Quesnoy-Cambridge

On 4 November 1918, the town of Le Quesnoy was liberated by New Zealand troops. In 1968, the 50th anniversary of this liberation was celebrated in force. In April 1998, some eighty years later, Le Quesnoy made sure it did not forget.

Many activities and events have been organised (parades, tree-planting, an awards ceremony, exhibitions reflecting the friendship between Le Quesnoy- Nouvelle-Zélande, the decoration of the town, including banners and flags...)

The 80th anniversary ceremony was also marked by the announcement of Le Quesnoy and Cambridge as twin-towns and an account of the awarding of the French Legion of Honour, in 1997, to Lieutenant-Colonel Blyth, the last surviving New Zealander to have scaled the walls of Le Quesnoy during the attack.

In New Zealand, to commemorate the 80th Anniversary of the end of the First World War and the last battle of the war in which New Zealand troops were involved, an exhibition “All Quiet on the Western Front?”, the story of New Zealanders in France during WW1, was shown at the Waikato Museum of Arts and History, in Hamilton, from 11 November 1998 to 14 March 1999 and was opened by His Excellency Mr Jacques Le Blanc, French Ambassador to New Zealand.

The exhibition, rich with photographs and weaponry artifacts, was researched and curated by Dr Nathalie Philippe, 1998 Historian-in-Residence (Bank of New Zealand River of Time Historian-in-Residence project) and co-sponsored by the Waikato Museum of Art and History, BNZ, the Waikato Times and the University of Waikato. It was also supported by the French Embassy in Wellington.

Cambridge is situated near the town of Hamilton, the fourth largest city in New Zealand, in Waikato, a region in the North Island, approximately 150 km south-west of Auckland.

After the idea was considered for many years, Le Quesnoy and Cambridge were declared twin-towns in 1999.

The French agreement was signed by the French Ambassador to New Zealand, in Cambridge on 16 February 1999. A picture was gifted to New Zealand on this occasion by the town of Le Quesnoy.

At the same time, Le Quesnoy created a committee named “Maison Quercitaine de la Nouvelle-Zélande” whose mission is to: maintain the ties of friendship between Cambridge and New Zealand following the establishment of the two towns as twin-towns, maintain its grateful collective memory towards New Zealand and its inhabitants, improve the level of English in order to improve communication, promote the English language and French culture to foster cultural exchanges in a larger sense. 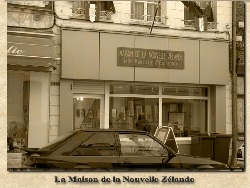 The “Maison Quercitaine de la Nouvelle-Zélande” was officially opened on 18 June 2000, the date of the commemoration of General De Gaulle’s appeal to the French nation. The Mayor of Cambridge, accompanied by a delegation, was present. This place acts as a permanent exhibition in that it houses all documents linked to relations with New Zealand. Furthermore, the “Maison Quercitaine de la Nouvelle-Zélande” would like to be considered as a meeting place for all New Zealand visitors.

On 30 March 2004, Le Quesnoy Place in Cambridge was inaugurated in the presence of the Ambassador of France to New Zealand, Mr Jean-Michel Marlaud.

Since the creation of this twin-town relationship and the association “Maison Quercitaine de la Nouvelle-Zélande”, the exchanges have noticeably increased, in both number and quality. There are a great number of bilateral visits, school and cultural exchanges.

200 of the 800 tourists who visit the town each year are New Zealanders.

Furthermore, it is important to note Chantal Perrin’s documentary “They Came from the Uttermost Ends of the Earth” which commemorates the liberation of Le Quesnoy by New Zealand troops and illustrates the gratitude of Le Quesnoy’s inhabitants shown towards New Zealand since then.

"Te Awarua”, a play produced by the Altus company and written by Albert Belz, a New Zealand writer of Maori origin, was staged in Le Quesnoy. This play was based on the ties between Le Quesnoy and New Zealand following the liberation of the town in 1918.

The year 2004, named “The Year of Oak and Fern” centred around the theme of the friendship between Le Quesnoy “The Town of Oaks” and New Zealand, whose emblem is the fern, was the opportunity to present events representing New Zealand culture right throughout the year.

The official launch took place in February with the carnival, one of the most important events of the town and of the region.

That year a giant Maori figurine came to join Bimberlot, Le Quesnoy’s giant. It came from Akaroa (near Christchurch in the South Island), it is four metres high and extends its tongue like a Maori warrior performing the haka.

It was also the opportunity to discover :

“In the whirlpool of history,” memories of a World War I soldier (24 April)

“Concert by the Garde Républicaine” (30 April)

“The Liberation of Le Quesnoy” (4 November)