On Friday the 4th of December, six prominent New Zealanders travelled to France to take an active role in the creation and elaboration process of the French memorial to be erected in Pukeahu National War Memorial Park in 2018. An expected outcome of the symposium is a general design brief that will feed into an architectural competition for the memorial that the Embassy of France is planning to organise in 2016 in New Zealand. 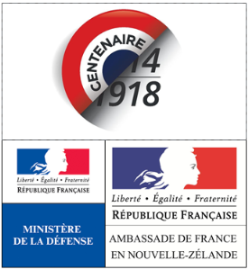 On the occasion of the one hundredth anniversary of the end of World War I, and at the invitation of New Zealand authorities, a French memorial gifted to New Zealand by the Government of France will be inaugurated within the Pukeahu National War Memorial Park in Wellington in 2018. The memorial will celebrate and bear testimony to the long-lasting friendship and the strong bonds forged between France and New Zealand on the WWI battlefields.

In order to establish the general parameters of the memorial with regards to its design and remembrance purpose, the French Embassy in New Zealand, jointly with the French Ministry of Veterans and French First World War Commission, has organised a symposium in France, from December 6 to 12, 2015. This symposium gathers together six prominent New Zealanders who will spend a full week interacting with French organisations and specialists involved in the WW1 commemorations, including museums’ curators, historians, elected officials, veterans’ associations…

Three French participants, photographer Jean Richardot, visual artist Patrice Alexandre and historian Yves Le Maner, will be joining the New Zealand delegates to discuss how French and New Zealanders look together at this part of our shared History. The group will be invited to visit some of the most significant places of remembrance for France, New Zealand and other Commonwealth countries on the Western Front. Beyond the unmissable Carrière Wellington, Longueval and the Caterpillar Valley, the visit will also take the delegates to the Invalides Army Musem, the Museum of the Great War in Meaux, the Verdun memorial, and the World Centre for Peace, Liberties and Human Rights, among others.

This initiative arises from the strong belief that a memorial representing the relation between the two nations should have its main characteristics and purpose designed collectively, through a creative dialogue uniting French and New Zealand representatives from the civil society. The brief produced on the conclusion of the symposium will focus on the “big ideas” that the memorial should represent, leaving plenty of creative flexibility to the architects and designers to best represent them.

The six New Zealand participants are: Rhys JONES, CNZM (head of delegation) Lieutenant General Rhys Jones was appointed the Chief of Army on 1 May 2009 and in January 2011 was appointed as the Chief of the Defence Force. He served in this role until January 2014, during which time he was one of the drivers behind New Zealand’s First World War Centennial project. On departing the Army, Rhys Jones was appointed the Executive Director of the National Military Heritage Charitable Trust where his role was to coordinate the creative work of the film-maker Sir Peter Jackson with the fundraising, operational management and construction work required to support the project.

Dave ARMSTRONG Dave Armstrong is a playwright, newspaper columnist and museum writer/concept developer. Dave’s hit comedy, Le Sud, written in 2009, has played throughout New Zealand. Le Sud imagines that the entire South Island was colonized by the French, and has been enjoyed by thousands of New Zealanders. King and Country, written in 2005, drew on letters, telegrams, newspaper articles, and recordings to tell the story of New Zealand soldiers in World War I. In 2014-15, Dave worked as a writer and consultant on Gallipoli: The Scale of Our War at Te Papa, and as a writer and audio director on the groundbreaking Ngā Tapuwae app, which provided e-guides for visitors to Gallipoli and the Western Front. He also wrote scripts for the first two series of Great War Stories presented by Hilary Barry on TV3.

Stephen MCDOUGALL Stephen McDougall has been a Director of Studio Pacific since the company’s founding in 1992. He is a Registered New Zealand Architect and Fellow of the New Zealand Institute of Architects, with 30 years’ work experience in the disciplines of urban design, strategic masterplanning, architecture and interior design. Studio Pacific Architecture, in collaboration with sculpturer Kingsley Baird, won an international design competition to design the New Zealand Memorial, located on the Anzac Parade in Canberra, Australia. The Memorial was a gift from the New Zealand Government celebrating the relationship between the two countries. Other relevant Studio projects include the restoration and renovation of the Carillion, the Hall of Memories and the setting for Tomb of the Unknown Warrior at the head of Wellington’s new Pukeahu Park.

Elizabeth KNOX Elizabeth Knox is the author of twelve novels and three novellas. Her book The Vintner’s Luck, won the Deutz Medal for Fiction in the 1999 Montana New Zealand Book Awards, and the Tasmania Pacific Region Prize. The Vintner’s Luck is published in ten languages. Among many awards, Elizabeth Knox was the recipient of the 1999 Katherine Mansfield Fellowship which enables every year a New Zealand writer to spend a few months in Menton, France and the 2014 Michael King Fellowship. Her first novel, After-Z Hour, was first published on Armistice Day 1987 and won the PEN Award for Best First Book of Prose. In the story, a young New Zealand serviceman who died in 1920 soon after his return from France come back to haunt the minds of six young people stranded in an old house.

Robin LAING Robin Laing is one of New Zealand’s most experienced film producers. In addition to her long-term collaboration with director Gaylene Preston, she has worked with Christine Jeffs, Hamish Rothwell, Shirley Horrocks and Niki Caro on feature films, cinema shorts and television documentaries. Currently she serves on the boards for the New Zealand International Film Festival Trust, the Film Career Education Trust and WIFT New Zealand. She is a past board member of the New Zealand Film Commission, the New Zealand Film Archive (Nga Taonga), the Producers and Directors Guild (SPADA), the Copyright Council and Screenrights and in 2002 she was appointed to the government’s Screen Industry Task Force.

Monty SOUTAR Dr Monty Soutar is a senior historian with the Ministry for Culture and Heritage. He is currently the foremost Maori military historian in New Zealand. Following on from his successful book Nga Tama Toa: the Price of Citizenship, about the role of the 28th Maori Battalion during the Second World War, he is working on a major publication about Maori participation in the First World War. He has been a school teacher, university lecturer, holds several university degrees, has served in the NZ Army, holds a number of appointments on national advisory boards in New Zealand, including the First World War Centenary Panel, and was named in this year’s New Year’s Honours list as an officer of the NZ Order of Merit.