Meeting between Jean-Baptiste Lemoyne and David Parker, Minister for Trade, Export Growth and the Environment (Paris, 24 May 2019) [fr]

Jean-Baptiste Lemoyne, Minister of State attached to the Minister for Europe and Foreign Affairs, met today with David Parker, Minister for Trade, Export Growth and the Environment of New Zealand. 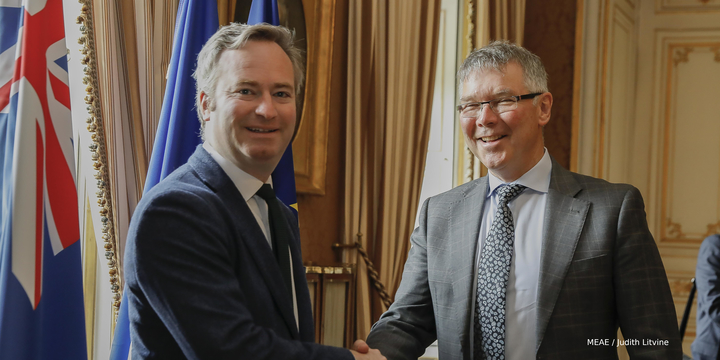 The ministers welcomed the launch of the Christchurch Call by President Macron and the president of New Zealand. They underscored Paris and Wellington’s attachment to a rules-based international order. They discussed in detail the ongoing trade tensions and efforts undertaken by the EU as well as the Ottawa Group to preserve a rules-based multilateral trade system and to modernize the WTO, while keeping the dispute settlement system operational.

During this meeting they reviewed the status of negotiations on a free-trade agreement between the EU and New Zealand. The ministers underscored the need for the agreement to include an ambitious chapter on social norms and environmental standards, referring to the joint declaration adopted in April 2018 by the French President and New Zealand Prime Minister on promoting compliance with the provisions of the Paris Agreement as an essential clause in the free-trade agreement.

France and New Zealand have a close, longstanding relationship based on shared values forged on the battlefields of World War I, and engage in a regular dialogue on the international situation.